I took off this weekend to reconnect with nature. My destination the Dipikar island in the Campo Ma'an National Park, renowned for its amazing wildlife and fauna. Home of the West Africa lowland gorillas. I was accompanying two singers (Mr Leo and Wax Dey) and actress (Laura Onyama), who were visiting as WWF champions to advocate for a new climate deal for wildlife and communities.

The trip to Campo certainly had its own challenges. As tropical rains whipped the ground, it became evident why the WWF conservationists put their most robust Landcruiser vehicles and several teams of experienced drivers at our disposal.

The wooden and stone bridges for the most part leading up to the National Park could do with some repairs and refurbishment to make them safer. As the slippery roads heightened the risk of skidding on the often narrow treacherous road. In the wettest areas, heavy-duty trucks had left ridges of mud, making it tough even for the most dexterous drivers.

The 75km drive south of Kribi towards Campo took roughly 3 hours, we left the comfort of the tarmac at the Kribi Deep Sea Port area, for the off-road trip. The little town of Campo sitting next to Bata in Equatorial Guinea was a small charming coastal town, its vegetation divided between the coastal areas, and the dense equatorial forest, home of mainly the Baka and Bagyieli pygmies.

From Campo to Dipikar we covered another 25km drive to the Bangola bridge the gateway into the Dipikar Island, the richest portion of the park. From Bangola the crew of eco guards, conservationists, and artists trekked another sweaty 6km on a muddy footpath almost silently, respecting tips provided by trackers that the gorillas were last sighted in the area.

Anougue France, Gorilla Health Monitoring Assistant and her team of trackers welcomed us to their modest camp and briefed us on the Gorilla Habituation Project. Despite the persistent rains, the crew was determined to cover another 4km to the area where the gorillas were last sighted.

After close to an hour, we came to an area where we had to leave the footpath and venture further into the untouched forest.

The guides pausing each time our untrained boots cracked twigs noisily, urging for caution. The adrenaline rose when two or three trackers converged around an over 5m tall tree and pointed up towards its foliage. The first few looked up and saw nothing, then as our eyes adapted to the sun rays piercing through the tree canopy, a black shape became apparent at one of the tree-forks.

It sat there peacefully obviously aware of our presence long before we could spot it. But determined not to be disturbed. No sounds, the specialists said is a sign that its habituation is on course, and it tolerates the human presence. Occasionally it lets it's huge arms hang down from it's resting place. "It has been a wet day" France explained, "this is their rest hour, that is why they went high up to the trees to bask in the sun."

We obviously want to see more of the troop of about 26 gorillas believed to be high up in the trees or around us. An exact figure of the real gorilla population is still to be completed. The trackers suggest we retreat so that they try to lure them down for the photographers desperate for a shot. Several clicks are heard, but the gorillas refuse the invitation to come down. Despite ruses like clicking sounds made with the tongue and ripping off leaves like food to attract them, they don't yield.

We decide to leave them alone. Happy to have seen them high above us. The wildlife champions now fully understand their role, encourage the government to do more to protect such endangered species, and promote ecotourism. A  tough job, they have bravely taken upon themselves to do. Put their star power at the service of wildlife and make an even louder call for a new deal for nature and peoples.

Human activity around the park is on the rise, with agricultural concessions being granted to industrialists, the construction of the Kribi Deep Sea Port, and much more. Not every part of the Campo Ma'an National Park is as secluded as Dipikar, surrounded by the Bangola and Ntem Rivers. To keep this little piece of paradise happy government must intentionally step up its wildlife policies, conservationists' stress.

If seeing these gorillas, was simply breathtaking, I couldn't help but admire the simplicity of the locals, and their ingenuity. From the fireplace to the handwash, their tables were eco-friendly and original. 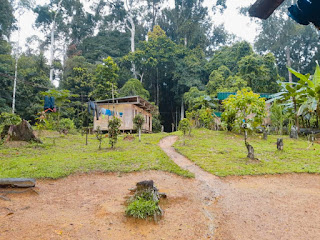 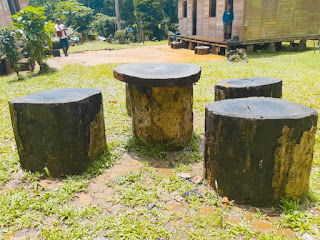 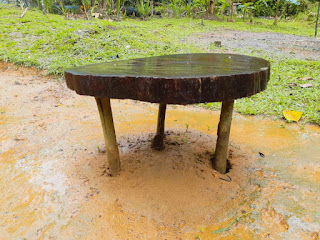 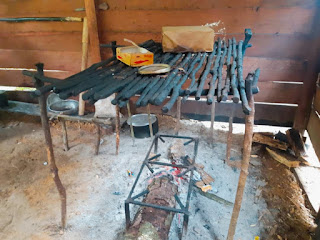 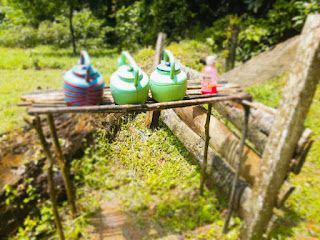