It will take us another century to hear a voice like he's.To enjoy a breath that frees. His  towering figure made him taller than most men. His big heart seemed to accommodate even the smallest of us. His mastery of the sax and other instruments left us in awe.

I remember asking for a selfie at the Warda Sports complex in 2000, as a young reporter backstage. And he paused and smiled. A true star. Immense yet accessible.

I always remember the 'Aye Africa' video with the jolly Pops playing to and with children of the world.

We grew up with his smooth effortless tunes. That blew through our spirit with the freshness of the Wouri breeze. 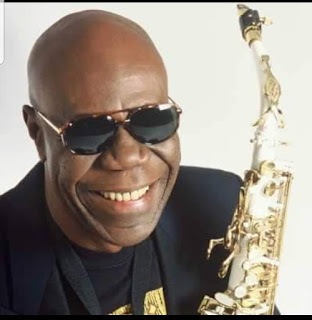 The more I listened and understood music, the more I realized that this Pops was more than a tall black happy man. He was a genie with the power to take away our pain.

So when I felt low in Molyko I listened to his music. He played and laughed. Enjoying every bit of it. Making it feel less like work and more of pleasure.

I was on an international flight once and sat next to this young white girl who must have been less than 8. A flight attendant had tucked her in her seat. She was traveling alone. After chatting briefly with this child. I gave her one of my earphones and played her some of his music. She smiled as she listened.

When she asked who was playing. I told her it was the Louis Armstrong of Africa. She was marvelled. And the music did to her what it does to me.

I remember a work visit to Seoul in 2015. Sat with media personalities across the world. They started paying attention to me when I said I covered Boko Haram. An outspoken Ugandan journalist wasn't too impressed. But when he realised what music I  listened to. He immediately warmed up to me. And told me how BIG this musician is.

At the end of the trip he surprised me at the farewell lunch. He suggested I speak on behalf of the delegation.  Saying I was the youngest but a real leader.

I have never separated with his music since. It is always in my pocket, ears or rucksack.

Thank You. Manu.
Thank You Groovy Pops.
Posted by fonka mutta at 6:35 AM No comments:

The battle over education

The media is awash with politicians frantically trying to reconnect with their bitter people by campaigning for an effective school resumption in the NW and SW regions. A campaign that is noble. Yet upsets many. The average South westerner North westerner doesn’t want to be lectured about education. More so by people who may not have as many rural schools as they do.
They want security. Not gunmen in front of campuses, but an assurance that their children can walk safely from home to school and back without hearing gunshots or being hit by a stray bullet. This not just in Buea and Bamenda but also in Eyumojock and in Lebialem. 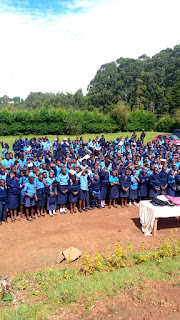 The simple truth is gunshots will still resonate in these two regions every now and then, as military and secessionist engage each other. For how long hard to say.
Amidst separatist calls for school boycott and a lockdown, and government’s call for school resumption, the noise is becoming deafening and many parents are unsure which way to go.
A recent UNICEF report https://www.unicef.org/child-alert/education-threat-west-central-africa says close to 4500 schools were closed in Cameroon because of conflict. Attacks on schools recorded between the months of January to August totalled 27. At least 19 teachers and 58 students were equally kidnapped.
Josephine Bourne, chief of Education for UNICEF says “at no time is education more important than in times of war”. Extensive work by this UN agency highlights the real danger of suspending education. Young boys become child soldiers instead of teachers, young girls become child brides and mothers instead of engineers. 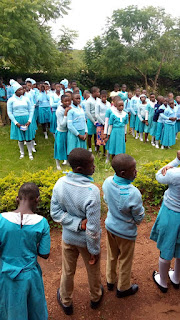 Hopelessness, violence, no education, no social skills will result in radicalization for many displaced children. In Somalia books and a librarian rode to communities on camels in an attempt to keep education going despite conflict.

In a perfect world, a cease fire, dialogue, disarming and an end to hostilities must pave the way for school resumption. But we are not living in one. Families that can afford it have already sent their children to study in safer zones. Yet thousands who cannot afford it remain trapped between the warring camps. These children must continue getting education as hard as this may seem, if we want them to contribute positively to nation building in the future.
Sadly education has been weaponized by the political class. In this battle over education separatists feel school resumption will be defeat. Government thinks effective schooling will be victory.
The only victory will be getting politics out of education and making the country safe again.
Posted by fonka mutta at 2:58 AM 1 comment:

At least 120 Cameroonian students are currently enrolled at the elite South African based Denel Aviation Academy under government scholarship.
The school of technical aviation with over 40 years of experience is training the future engineers of the Cameroon Airforce in various technical trades.
As part of CRTV’s special May 20 coverage, Beau Bernard Fonka Mutta caught up with some of the Cameroonians on apprenticeship at Denel. His special report.
https://youtu.be/_RK2kDU3iAs
Posted by fonka mutta at 12:34 AM No comments:

South African political parties have had final campaigns ahead of next Wednesday’s general elections.

This weekend the top three parties, the African National Congress, the Democratic Alliance and the Economic Freedom Fighters all staged grand campaign events.

Beau-Bernard Fonka Mutta witnessed most of the campaigns around Soweto and Johannesburg and compiled the following report.

AU Reforms. What for?


The head of the Institutional Reform Implementation Unit of the African Union, Prof Pierre Moukoko Mbonjo has briefed the Pan-Afircan Parliament on what he termed a robust reform process of the AU.
He noted that the AU seeks to improve it’s performance by carrying out reforms that will ease decision-making, improve partnerships and harmonize it’s institutions for a more people-centered organ.
Here below is an in-depth interview with the Cameroonian technocrat

It was truly an enchanting and inspiring encounter. Last month I met with this 10 year old, multiple award winning Cameroonian author, Stacey Fru, who lives in South Africa. She wrote her first two books, Bob and the Snake and Smelly Cats, at the age of 7.

Her illustrated children's books takes the reader into her imaginative world from which they exit with some precious moral lessons.

As she pursues her writing career, Stacey, has a number of other projects going. As a motivational speaker and online TV host she is touring South African colleges and universities, inspiring the young and the old alike.

Beau-Bernard Fonka Mutta met with the prodigy in her parent’s Johannesburg residence. Enjoy this enchanting meeting.


Imagine a monastery that is holy to Judaism, Christianity and Islam. This article takes you into a pilgrim's paradise into the mountainous North Sinai region to discover the Sacred Monastery of the God-Trodden Mount Sinai, popularly known as St Catherine’s Monastery.

It is believed the remains of St Catherine of Alexandria were found on the mountain surrounding the monastery around the year 800.  She was killed in 305 AD by Emperor Maxentius.
Follow my video link into the historic monastery.

Posted by fonka mutta at 6:31 AM No comments: